This was my first design project after finishing the UX Playground course. I mainly focused on developing a smart device prototype, which utilised my knowledge and experience with technology. Within a few months, I learned to use ProtoPie and LittleBits to create complex interactive prototypes without coding. It was a fun learning experience and useful to find out what prototyping tools are available for designing smart device experiences without any code. I also had the opportunity to explore animation and create interactions for the prototypes.

With more smart devices entering the market, managing our daily activities and acquiring information has become increasingly convenient. These smart capabilities have created an extra layer of complexity, which can be challenging for designers to develop strategies and solutions. Designers may need to explore areas such as electronics, to better understand how the interactions between humans, hardware and software can affect the overall user experience of a smart device.

Our goal was to showcase the features of Adobe XD by developing a smart device prototype and presenting it at Adobe Max 2018. It was also showcased at UX Playground in WeWork, London and Digital Age Tech Summit, Istanbul.

The following are the key areas we focused on: 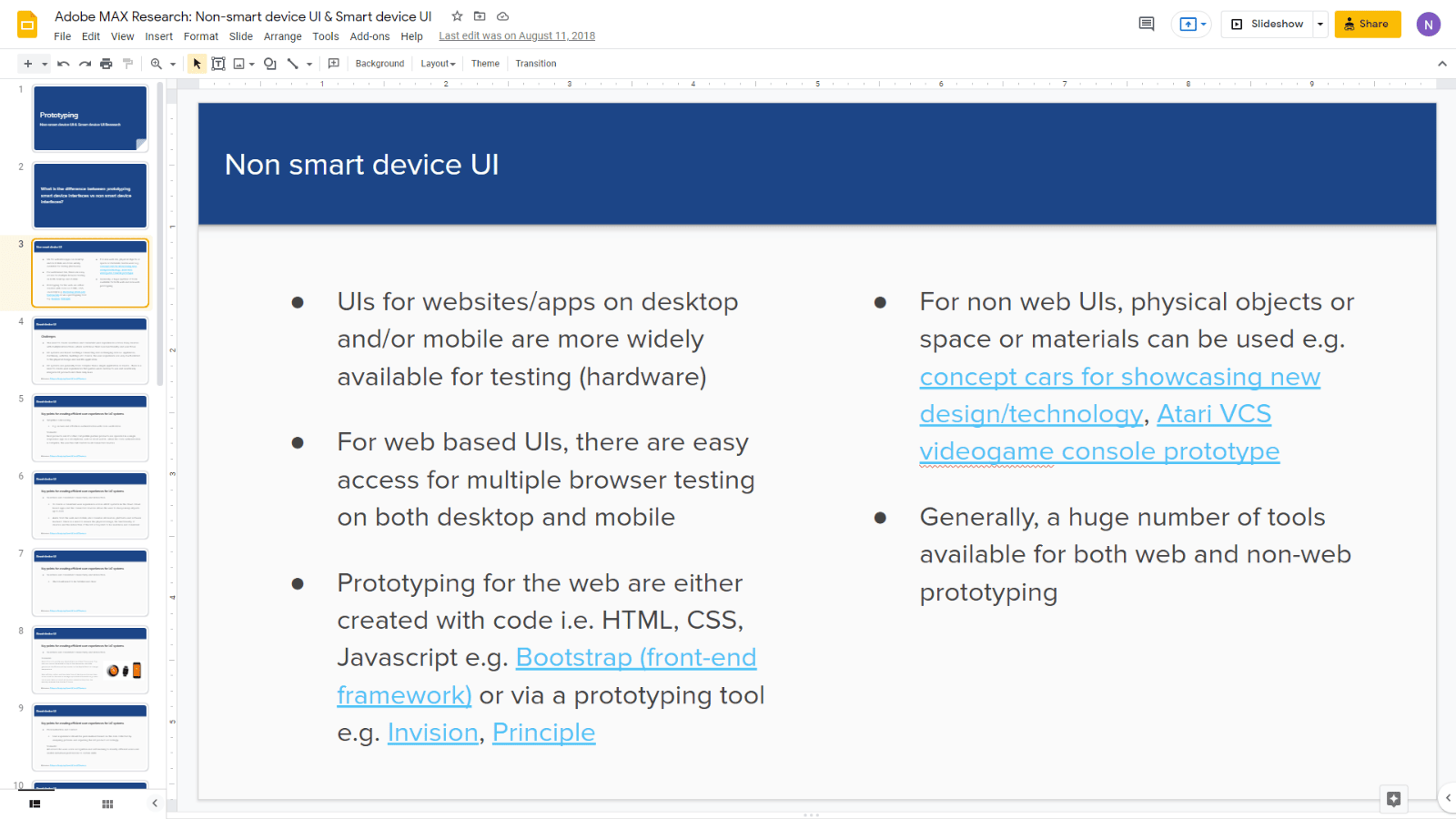 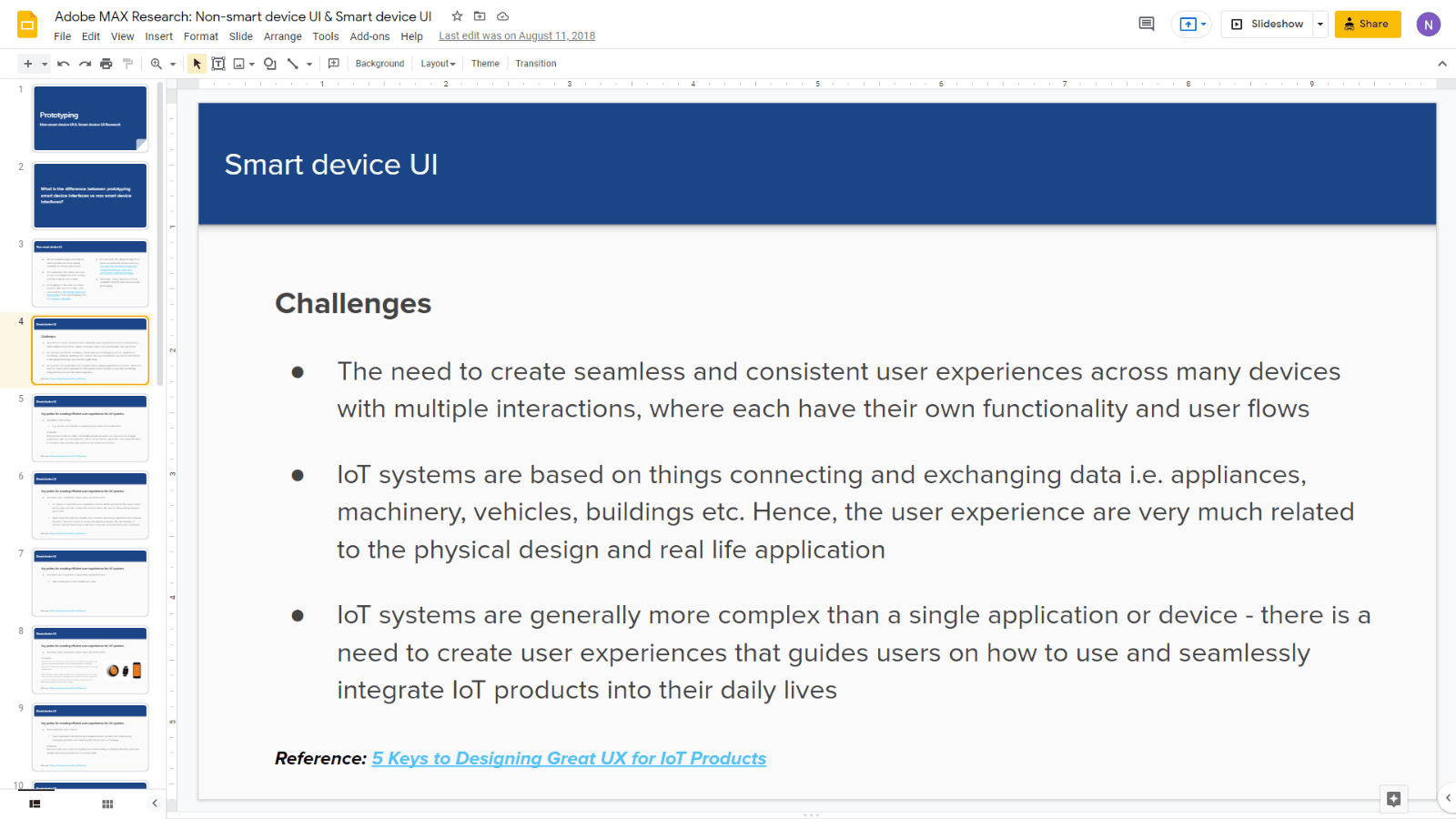 I also researched what prototyping tools Adobe XD can integrate with. However, from my experience with the UX Playground course, we tested ProtoPie as the tool for prototyping animation and interaction (this was before Adobe implemented the Auto-animate feature into XD).

We contacted ProtoPie who suggested we use Arduino and LittleBits for smart device prototyping. I knew Arduino required programming but LittleBits needed research as I was not familiar with the product. 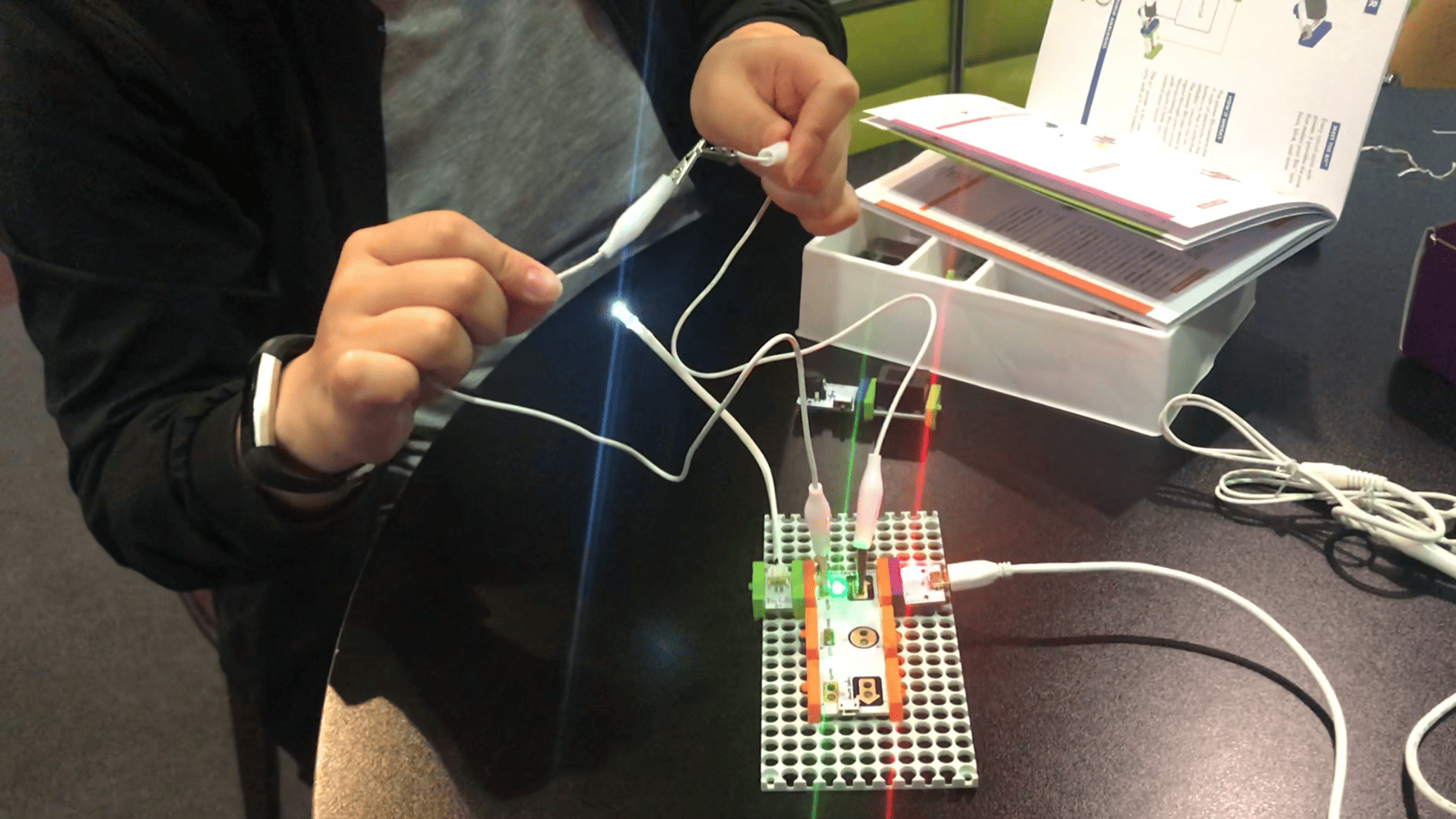 My demo on a light switch using LittleBits' tutorial.

For ideation, we explored how we interact with physical interfaces e.g. light switches, and how they are designed in existing smart devices. This helped us to plan our process and divide the work within the team. 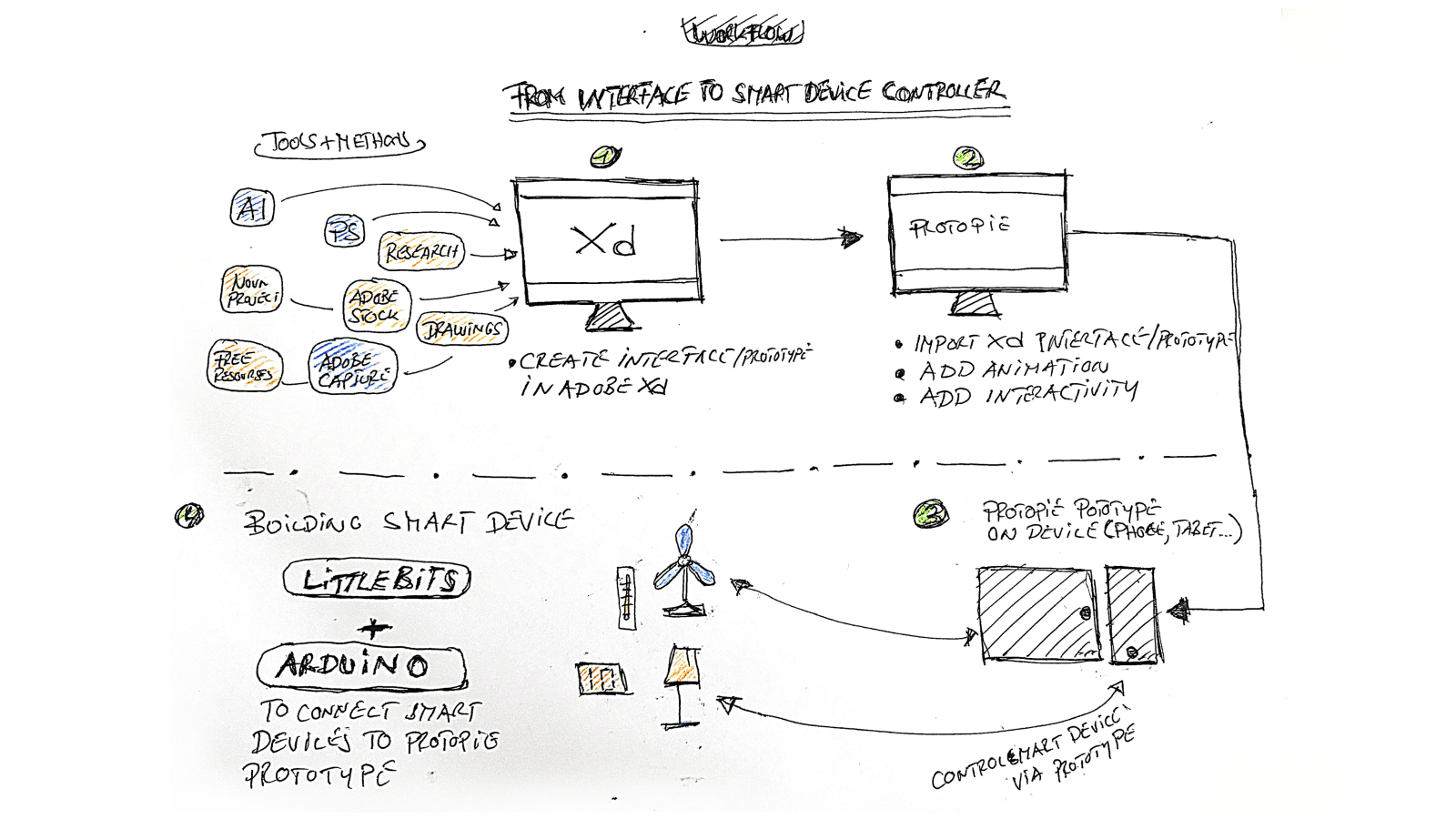 Our workflow process to create the smart device prototypes.

Throughout this phase, I was experimenting with LittleBits and ProtoPie. It helped us to see what types of simple interactions we can prototype for the project. The process was mostly trial and error due to limited resources for integrating LittleBits with ProtoPie. However, it was an interesting challenge as it felt like I was doing programming visually e.g. logical steps and conditional states for triggering animations, considering the inputs and outputs, and how inputs may produce the output.

Due to the complexity of developing the prototype digitally and physically, I had to do this in two parts:

From our Ideation, we focused on creating prototypes for the following interactions:

We also researched animations and interactions created by other designers for inspiration. However, we were mindful of creating animations/interactions that should feel familiar and natural (as to the real world) e.g. adjusting brightness with a slider.

Before prototyping, Stephanie created the designs in Adobe XD. I then imported them into ProtoPie and experimented with different solutions. It was an iterative process until we found a solution that matches the vision we had for each of the prototypes. 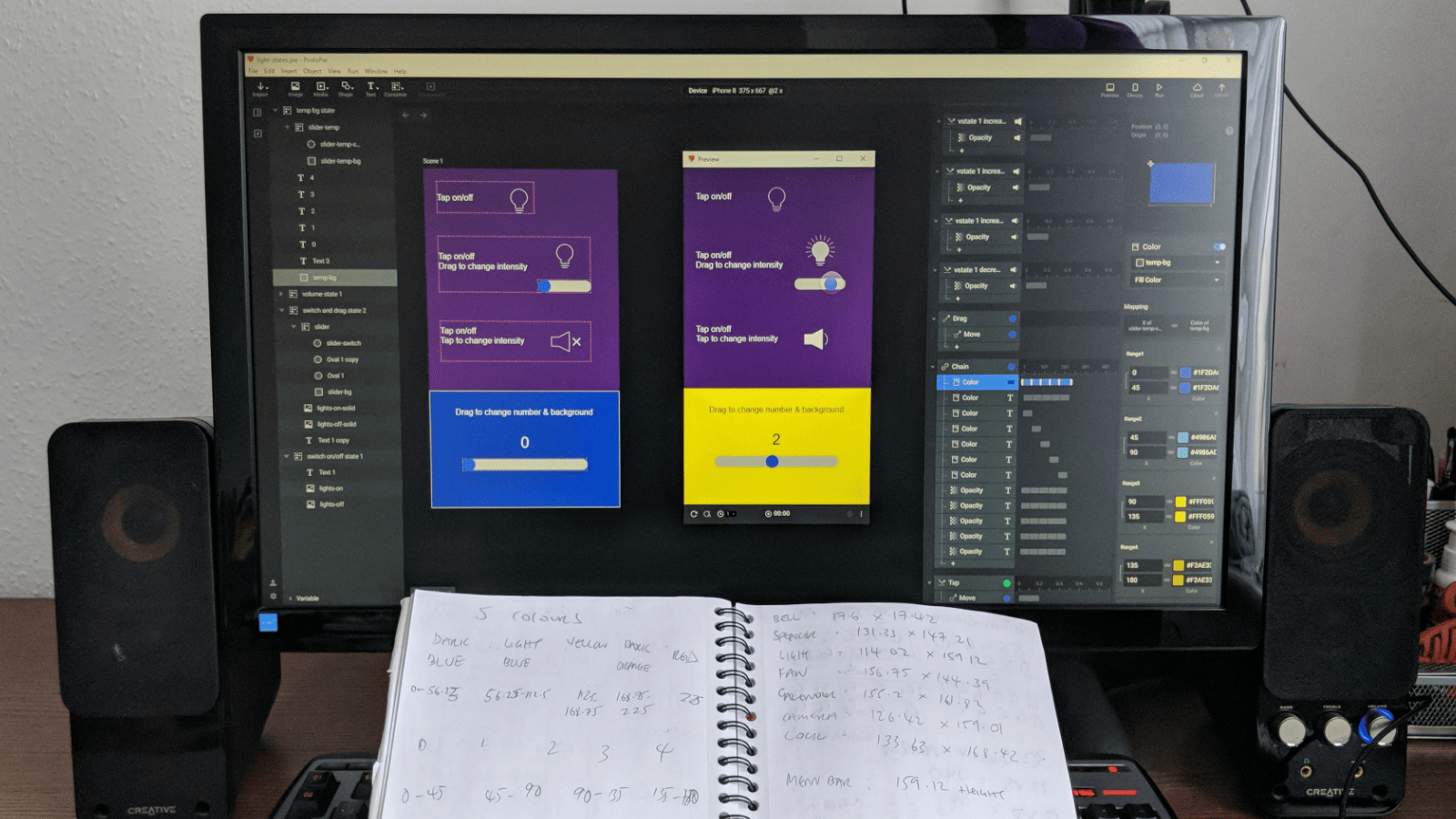 A test prototype for creating sliders and switches to control light. 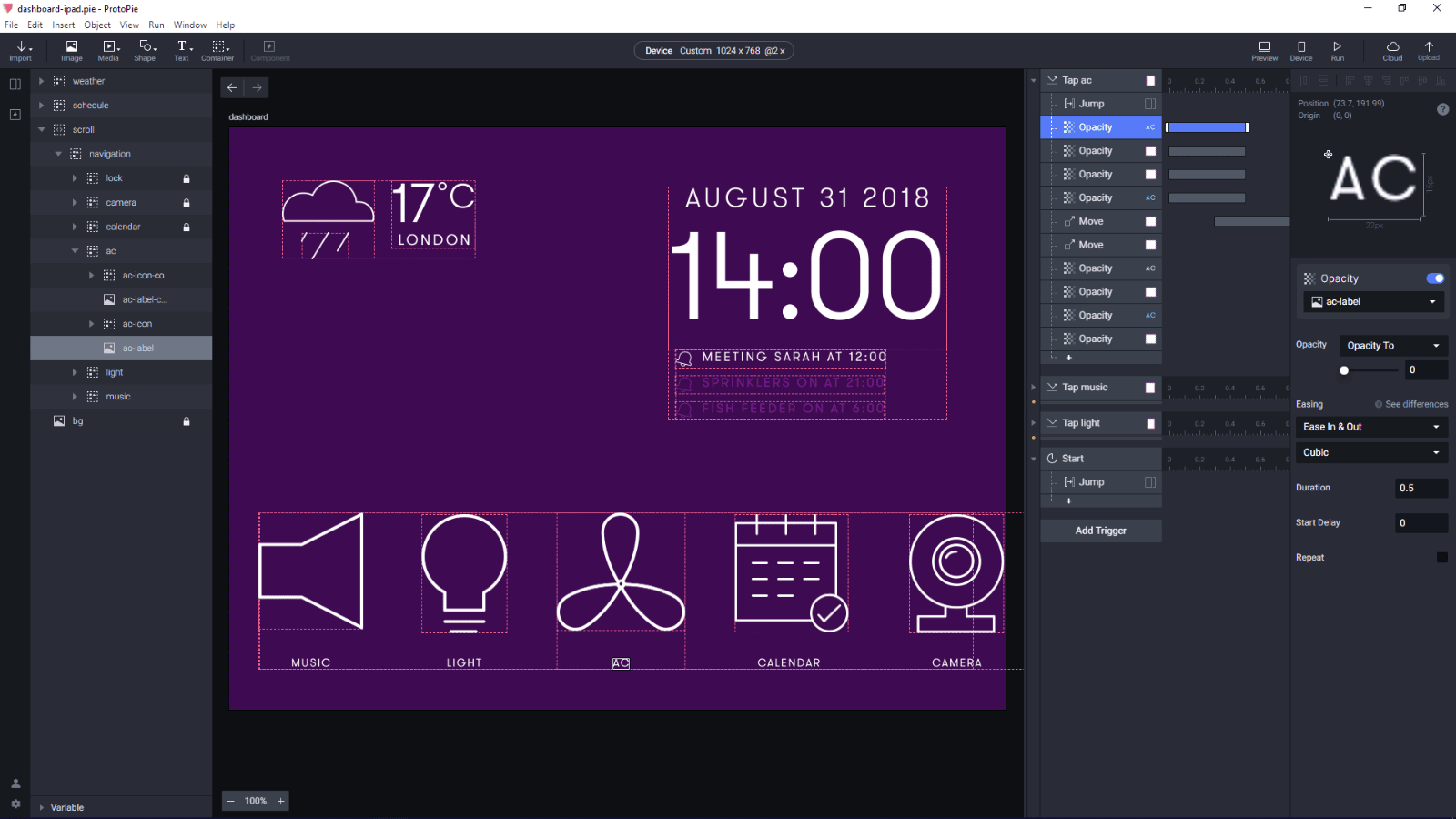 Creating the dashboard prototype for iPad. 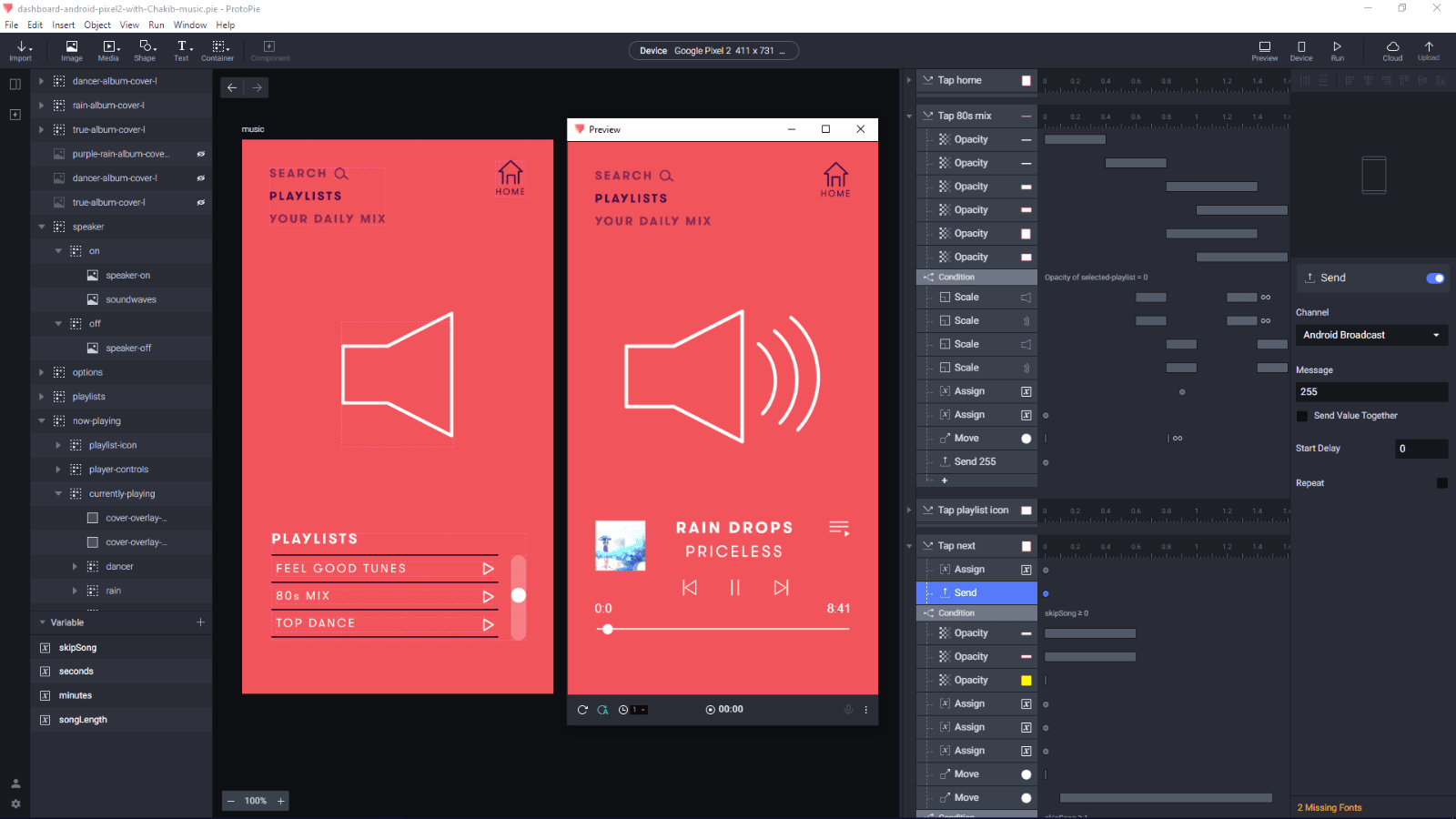 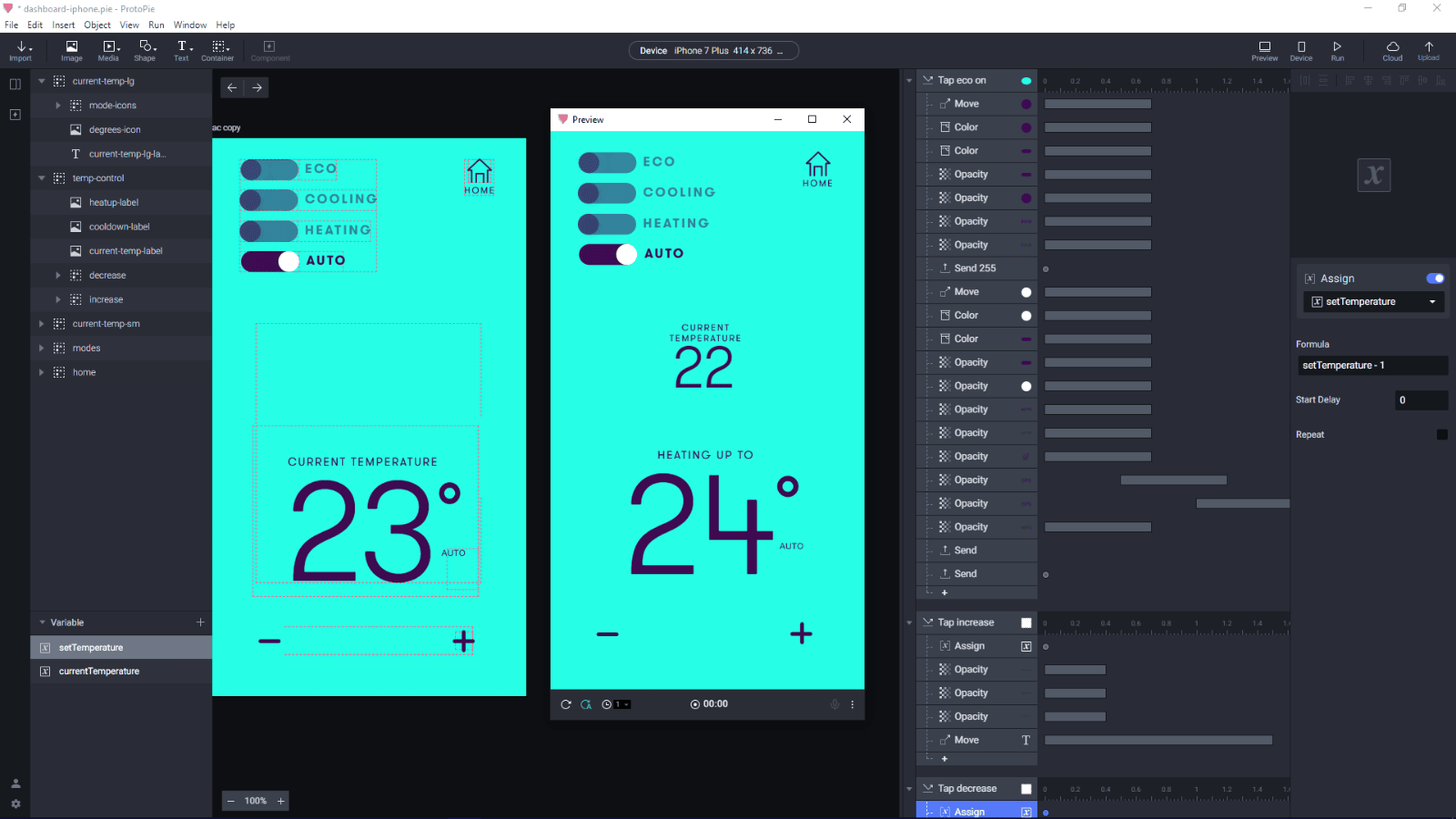 Integrating LittleBits with the prototypes

When the prototypes are complete, the next step is to include LittleBits. So far, the only method for connecting ProtoPie and LittleBits is to have the same message ID. This is like a destination address for sending and receiving messages. The ID is entered into ProtoPie and the bridge app (provided by ProtoPie) to enable communication between the two.

Again, I had to do many tests and iterations because the hardware can change the states and inputs/outputs of the prototype. The process was time-consuming because integrating LittleBits added another layer of complexity.

The following videos are all of the prototypes demonstrated at Adobe Max 2018, UX Playground and Digital Age Tech Summit.

Sharing with the community

Our work was showcased at: 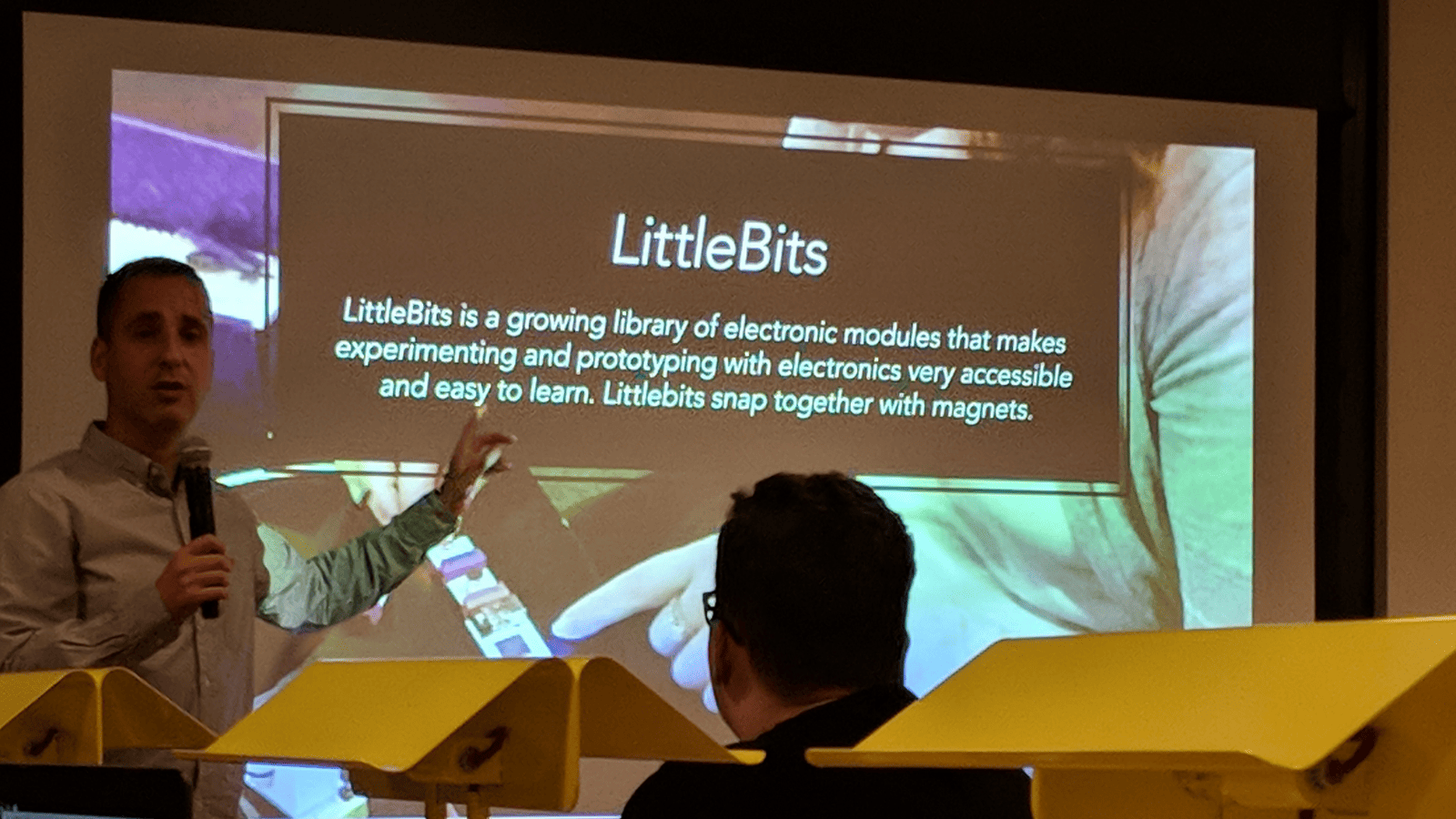 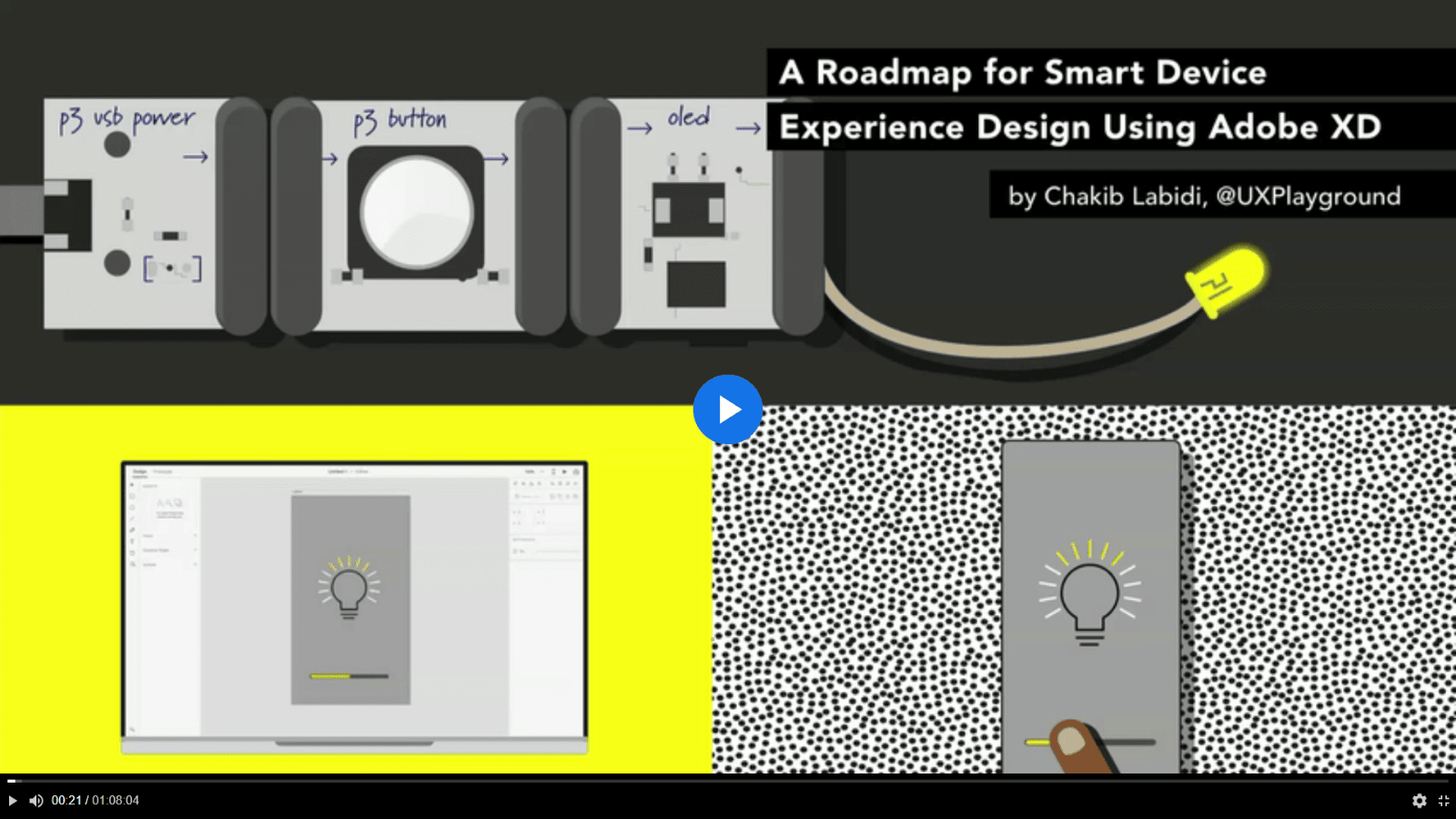 Recording of Chakib presenting at Adobe Max 2018 in Los Angeles. 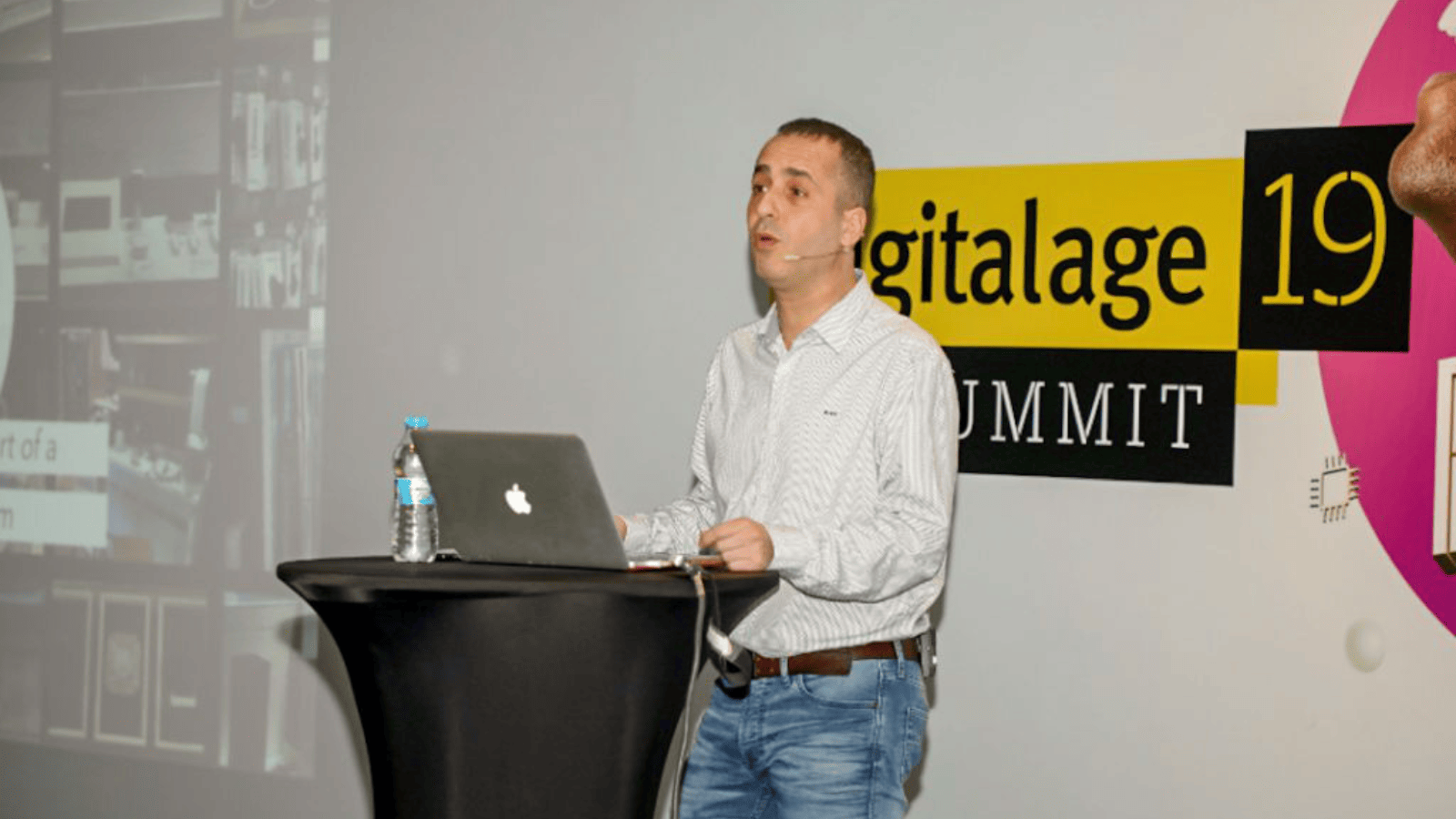